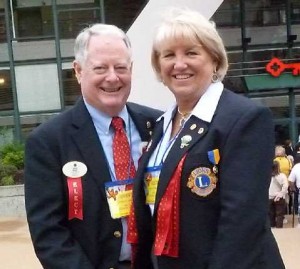 Lion Paulette and I have returned from 5 days of District Governor School and 4 days of International Convention in Seattle, Washington where our new International President from Hong Kong, Dr. Wing-Kun Tam, or Tam, as he prefers to be called, was installed.

In addition, 17 International Directors were elected to serve our Association, among whom is Tennessee’s own Chancellor Bob Corlew from District 12-S.  I, along with 752 other District Governors from around the world, was installed to serve you in 12-N as your District Governor for Lions year 2011-12.

While in Seattle, I had the opportunity to listen to and speak with President Tam.  I find him to be a remarkable person, rising from humble beginnings to President of the largest service organization in the world.  His objectives for Lions are simple but profound.  I’d like to share them with you and show how our District objectives closely align with his.

President Tam is humbled by our founder, Melvin Jones, and his belief that Lions International would gain strength with each Lion who joined our ranks- person by person, community to community serving people along the way.  Tam is calling on all Lions to embrace a renewed sense of belief of what it truly means to be a Lion – a belief that each individual Lion makes a difference and that, together, we can change the world even more than we have yet imagined.

He has set his vision on three specific goals for this year.

If you recall from my message last month, I set the following goals for our district:C

Part of our strategy for formation of new clubs is to target young folks with the vitality to do the work of Lions and to retain existing members resulting in a net membership increase of at least 60.  President Tam suggests that if we treat our fellow Lions as if they were family our retention problem can be greatly reduced.  Planting one million trees is new information as of the Convention.  Where did that idea come from and why?

President Tam believes that civic beautification will make our lives enjoyable by making the world around us more pleasant. He believes giving back supports our motto, “WE SERVE.”  Tam quotes a Chinese Proverb, “A bit of fragrance clings to the hand that gives the flowers.”

While in Seattle, I committed to helping achieve Tam’s vision by adding to our District’s objectives the goal of planting one tree per member.  Based on the then available membership report, I signed us up to plant 1,143 trees in east Tennessee for our Lions year.  I have contacted the Tennessee Department of Agriculture Division of Forestry, who will provide me with 1,200 indigenous sapling pine trees in the Fall.  As I travel to visit the clubs, I will leave at least one tree per member with the club president for distribution and planting in their community.  Hopefully, by the time spring comes, we will have grown our membership and planted all the baby trees that eventually will help replace carbon dioxide in the air we breathe with life supporting oxygen.

Speaking of presidents, Tam noted that our International Constitution and Bylaws recognizes only two presidents within our Association; the position that he holds as International President and the Club Presidents.  He believes the presidents are the guiding forces that make our Association as great as it is.  He encourages the Presidents to catch the “I Believe” spirit and act to:  Start a tree planting campaign, enact a “My Club, My Family” philosophy, involve new members in club activities, revitalize your public relations program, expand your service projects, build future Lions leaders, and to support LCIF.