John Wolfe was recognized at the Rogersville Lions Club meeting with one of the highest recognitions Lions Club International has to offer. Bob Maes quoted from a letter from the International Office which read, “On behalf of 1.4 million Lions Club members worldwide… it is a pleasure to congratulate you on attaining the 50 Year Monarch Milestone Chevron Award.” 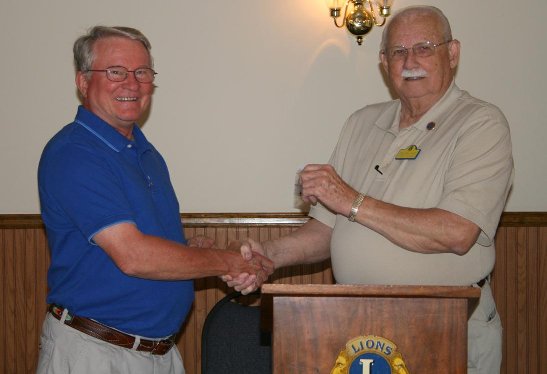 Very few clubs have members that have served in leadership for 50 years. Over the 50 years, Wolfe has been responsible for most of the clubs fundraising efforts which raises money for eye testing, blind schools, blind industries, seeing eye dogs and other rehabilitation efforts for blind people around the world.

Many local residents remember the light bulb sales and more recently mop and broom sales which raise most of the clubs money for it’s efforts.  Wolfe also is found manning booths at most local events selling popcorn or cotton candy for the Lions Club.

John has worked with other club members to make hundreds of visits to schools where children are screened for eye problems. New technology can detect and diagnose problems for children as young as 18 months and John has led efforts to visit area day cares doing testing for youngsters.

Wolfe has served 17 terms as president of the local Rogersville Club, has served as Cabinet Secretary for the State of Tennessee, Zone Chairman, and served as District Governor overseeing 62 clubs from Rockwood to Mountain City and north and south from Tellico to Newport.

The local club has supported many local non-profits and efforts and has sponsored a little league team under Wolfe’s leadership. Now he has been honored receiving the  Melvin Jones Fellowship.